This page attempts to list the load commands for various 8-bit computers, which were available from the late 70s to the late 80s. A load command is used to load a program into the computer's RAM memory. Often cassette players were used, loading programs from tape. Some computers also supported floppy disks and some were able to accept catridges. There are some computers using some combination of CLOADM. The C stands for cassette while the M for machine program. For example LOADM would load a machine program from floppy, while CLOAD loads a BASIC program from tape.

If you have comments, like something is wrong or you would like to add information for more 8bit computers, let me know using the Facebook form below. 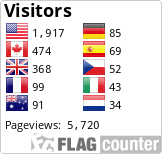